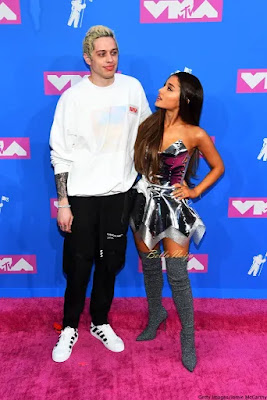 It saddens hearts to hear about two love birds who quit their relationship, but if the reason is justified, its understandable. Ariana Grande And Pete Davidson calls off their engagement according to reports from TMZ.

The duo started out engaged in June, after dating for a few weeks, but its a shocker that they are calling it off.

According to reports  they claim it wasn’t time for their relationship to start out. “It’s way too soon, its not shocking to anyone” Ariana was quoted saying in an interview.

The duo of Ariana Grande and Pete Davidson got engaged in June, and are should now be regarded as ‘ex-couple’, but a further run down by TMZ says there is still possibility of something happening between the two. Lets wait for the right time.

#Brown_Skin_Girl_Challenge: Did Wizkid Just elevate the feeling of self-worth in African Ladies?

Tonto Dikeh passes through the first phase of Cosmetic Surgery

Cardi B kills it on stage even with “bumpy” preganancy

Davido and wizkid makes list of top 10 most followed celebs...