Brazil’s bid for a sixth World Cup got off to a slow start as Switzerland stood their ground to snatch a 1-1 draw in Rostov-on-Don on Sunday.

The name on the lips of most fans and sport people was Neymar just before the start of the game, unfortunately the PSG man didn’t just fail to play up to expectation, but played yards below it.
The `Brazilian superstar could barely hold it together as he preferred to lose the ball to an opponent than pass to a teammate. In an evening when the swiss came all out for him, one would think been wise would mean get the ball and making use of it other than running into opposition players, especially for a player just returning from injury.

Neymar is an excellent player that can take on his man any day anytime and beat him with the ball irrespective of the player, but there are times when he over does it, and the match against swiss was one of those times when he happily chokes himself and losses posession.

On the other hand, Barcelona’s record signing was in good form as he picked up a loose ball on the edge of the area and in trademark fashion bent the ball crashing in off Sommer’s far post.
However, Brazil failed to build on their lead as Thiago Silva and Jesus headed off target from dangerous corners and were made to pay early in the second-half. 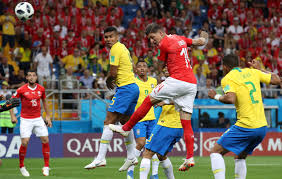 Switzerland had offered barely any attacking threat before levelling when Zuber took advantage of a gaping hole in the heart of the Brazilian defence to head home Shaqiri’s corner.
Forced back onto the front foot, Brazil turned to Neymar for a moment of inspiration but he could only blast into the side-netting before Coutinho sliced wide with a much simpler opportunity than the one from which he opened the scoring.
Brazil were unhappy that Zuber wasn’t penalised for a slight push on Miranda for the equaliser and felt hard done by again when Jesus tumbled under a challenge from Manuel Akanji inside the area with Mexican referee Cesar Ramos unmoved.
Thanks for reading. Kindly COMMENT (below) and SHARE with friends.

Have you seen this denim daiper-like panties?

How to make your laptop ‘last long’

How to dress perfect to a dinner party.